980-224-0398 info@fetalhealthfoundation.org
Arachnoid Cyst
FIND A TREATMENT CENTER NEAR YOU

What is an Arachnoid Cyst? 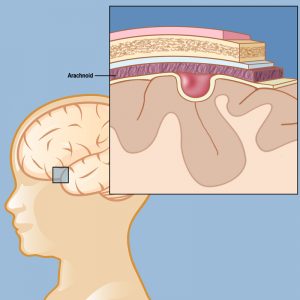 Arachnoid cysts are collections of cerebrospinal fluid located towards the back of the brain (called the posterior fossa). Layers of brain tissue called the pia arachnoid cover the cyst. It is far more common for a single cyst to be present rather than multiple cysts with the left side of the brain being the more common location. The exact cause is not well understood. These cysts do not tend to change significantly in size during the pregnancy. One of the main concerns is that the arachnoid cyst might compress other structures causing significant fluid to accumulate in the brain, referred to as ventriculomegaly or hydrocephalus (“water in the brain”).

An arachnoid cyst appears as a clear brain mass with smooth, thin walls. An important distinction is that the mass does not connect with the lateral ventricles, which comprise the brain’s fluid collection and distribution system. More rarely, bleeding in the fetal brain may cause an arachnoid cyst. Under this circumstance, it might be difficult to visualize the cyst by ultrasound.

If an arachnoid cyst is suspected, a detailed fetal anatomy survey by ultrasound should be performed to rule out other abnormalities.  Sometimes, a prenatal MRI may be necessary, MRI does not involve radiation; thus, it does not pose any risk to the fetus.  If other abnormalities are present, an amniocentesis may be recommended to look for a chromosomal or genetic abnormality.  Frequent ultrasounds may be performed (approximately every 2-4 weeks) to monitor the cyst as well as screen for the development of hydrocephalus (see Diagnosis). A cesarean section may be recommended if significant hydrocephalus develops causing a larger fetal head that cannot pass through the birth canal.

There is no fetal intervention recommended for arachnoid cyst.

After birth, a neurologist should eventually evaluate the baby. A CT scan or MRI may be recommended to evaluate the cyst and other brain structures. If other abnormalities are present aside from the brain, a geneticist may be consulted to determine if a genetic condition is present as well as recommend any additional testing. The newborn will be observed for the development of seizures.

If the cyst is small and is not causing any symptoms, the care team may recommend following the cyst rather than a surgical procedure. The surgical treatment involves either removing the cyst or, more commonly, allowing the cyst to drain. Drainage is achieved by placing a cystoperitoneal shunt. The shunt is a thin tube that drains the cyst into the abdominal cavity.  The primary goal to is to avoid shunt placement unless absolutely necessary.

Wondering what to do next?  Search for a treatment center, or get in touch. We’re a nonprofit formed by families who have experienced fetal syndromes, and we have resources to help.