980-224-0398 info@fetalhealthfoundation.org
Congenital Diaphragmatic Hernia
FIND A TREATMENT CENTER NEAR YOU 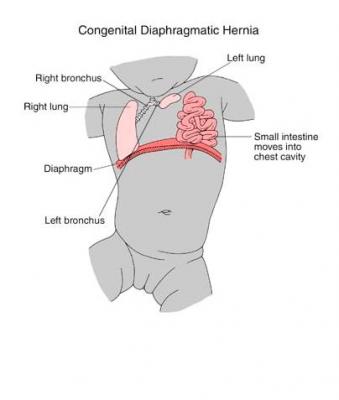 Congenital diaphragmatic hernia makes up approximately 8 percent of all major birth defects meaning it is seen in 1 in 3000 to 1 in 5000 live births per year.

After detection, the physicians will perform several ultrasounds during the pregnancy to closely monitor the baby, determine the severity of the hernia and the check the amount of amniotic fluid. An important aspect of the monitoring will be the calculation of the lung-head ration (LHR). The LHR is a good predictor to determine the severity of damage to the lungs. If fetal surgery is not an option – after the baby is born the doctors will move the organs that have moved into the upper chest back into the abdomen in to their normal location.

Yes at several centers around the country – one of the primary qualifications is a severe case of congenital diaphragmatic hernia. Otherwise corrective surgery will be done after birth.

If the following are present the doctor will not perform the tracheal occlusion:

The doctor will provide a tracheal occlusion between weeks 26 to 29 followed by removal of the occlusion at 32 to 34 weeks gestation.  A tracheal occlusion is when the doctors make a tiny incision in the mother and in the mother’s uterus and a tiny detachable balloon is placed in the fetal trachea.  After surgery and until the balloon is removed you will have to have weekly ultrasounds.  The balloon is removed after the lungs have developed.  Both insertion and removal are done in utero.

The baby will unlikely be able to breathe on its own due to the underdevelopment to the lungs but that all depends on how severely the developing lungs were compromised due to the hernia.

Long term effects – up to 60% of infants with CDH will have gastroesophogeal reflux.  Approximately 20 to 30% will experience some neurologic issues.