FIND A TREATMENT CENTER NEAR YOU 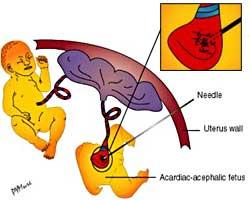 Acardiac twins, otherwise known as twin reversed-arterial perfusion (TRAP) sequence, is a rare and serious complication of monochorionic (one placenta) twins. Although the cause for the syndrome is not completely understood, it has been hypothesized that large vessels on the surface of the common placenta are responsible. Blood is perfused from one twin (“pump” twin) to the other twin (“acardiac” twin) by retrograde (backward) flow. Thus, the acardiac twin receives deoxygenated (oxygen depleted) arterial blood from the pump twin in the wrong direction.

The inadequate perfusion of the acardiac twin is responsible for a spectrum of lethal anomalies, including acardia (absent heart), acephalus (absent skull), severe maldevelopment of the upper body, and a relative excess of edematous (excess fluid) connective tissue. Although the pump twin is structurally normal, there is an increased risk of death (up to 50-75%) for that twin. This is due to two important factors. First, the pump twin’s heart has to work to support the perfusion (pumping of blood)of both the pump twin and the acardiac twin. Eventually, the strain to the pump twin’s heart may be too great, resulting in high-output heart failure. Second, premature delivery or miscarriage may occur due to the polyhydramnios (excess amniotic fluid volume) and/or rapid growth of the acardiac twin.

Risk factors associated with pregnancy loss include polyhydramnios (defined as a maximum vertical pocket of amniotic fluid greater than or equal to 8.0 centimeters), large TRAP twin (estimated fetal weight of the acardiac twin is 50% or greater than that of the pump twin), evidence of heart failure in the pump twin (hydrops), or critically abnormal blood flow patterns identified on Doppler ultrasound. Because of the high risk of pregnancy loss in pregnancies complicated by Acardiac/TRAP sequence in the setting of these risk factors, surgical treatment in the womb to separate the circulatory systems of the twins have been proposed.

The diagnosis of acardiac twins or TRAP sequence is suggested by the presence of a monochorionic (single placenta) twin pregnancy in which one twin (the pump twin) appears structurally normal (no ultrasound findings consistent with birth defects), while the other twin (the acardiac/TRAP twin) has multiple profound birth defects (as listed in the background section above) which are not compatible with life.

The diagnosis is confirmed with the use of combined pulsed and color Doppler ultrasound studies. This method allows for the documentation of the arterial blood flow perfusing the acardiac/TRAP twin in a retrograde fashion, thus securing the diagnosis.

Once the diagnosis is established, further ultrasound studies must be performed to assess whether that individual pregnancy is in the high-risk category for pregnancy loss. These findings are summarized in the section below titled, “Candidacy for Surgical Treatment”.

The following management options and corresponding expected outcomes are listed below for pregnancies complicated by acardiac twins (TRAP sequence) with a high-risk factor, thus meeting criteria for fetal surgery.

1. Expectant management: This means that your pregnancy will be watched closely by frequent ultrasounds and other methods, with the delivery timed to prevent the death of the pump twin in the womb. This is associated with a 50 to 75% risk of pregnancy loss or extreme prematurity.
2. Umbilical cord occlusion: There is approximately a 66% chance that the pump twin will survive, with a 5% risk of neurologic injury.

All pregnancies must be between 16 and 26 weeks gestation. Once the diagnosis of Acardiac/TRAP sequence has been confirmed, the presence of at least one of the following must be present to be considered a candidate for surgical treatment.

1. Size of acardiac twin exceeds the pump twin (abdominal circumference of acardiac twin larger than that of pump twin)
2. Polyhydramnios (maximum vertical pocket (MVP) > 8cm)
3. Critically abnormal Doppler’s in the pump twin (persistent absent or reversed diastolic flow in the umbilical artery, pulsatile flow in the umbilical vein, and/or reversed flow in the ductus venosus)
4. Fetal hydrops of the pump twin
5. Monochorionic-monoamniotic twins
6. The presence of a short cervix is a relative indication, and will be addressed on an individual basis

Because the peculiarities of each pregnancy complicated by Acardiac/TRAP sequence, it is very important to stress that a single surgical approach is inadequate to provide optimal treatment. Each pregnancy must be individually assessed, and the type of fetal surgery must be tailored to the specifics of each case. Important considerations include surgical access (it is preferable to enter the sac of the acardiac/TRAP twin if possible), the size and position of the acardiac twin, the length of the umbilical cord, and the location and length of the placental vascular connections.

Using the above-mentioned considerations, the following surgical approaches are recommended. Note that most surgeries are performed under local anesthesia with intravenous sedation. About a 2 to 3 millimeter (one tenth of an inch) incision is made on the abdomen to allow the insertion of the microsurgical instruments into the womb. Antibiotics are given to the mother.

1. Radiofrequency ablation is done with a very thin needle that is inserted where the blood vessels flow into the acardiac twin. Then, guided by ultrasound, a radiofrequency device is used to destroy the blood vessels in order to stop the blood flow. This is all done without any incisions which makes the pain and recovery very similar to an amniocentesis.
2. Umbilical Cord Ligation (UCL): Suture ligature is tied around the umbilical cord of the acardiac/TRAP twin. The procedure could be carried out by ultrasound alone or by combined ultrasound-endoscopy. Some cases do require a second port (incision).
3. Laser Therapy of the Placental Vessels (L-AAVV): Using the techniques originally developed for the treatment of twin-twin transfusion syndrome (TTTS), the communicating vessels on the placental surface are sealed by laser energy.
4. Laser Umbilical Cord Occlusion (L-UCO): The umbilical cord artery then vein is laser occluded using laser energy guided through an operating endoscope.
5. Transection (cutting across) of the umbilical cord of the Acardiac/TRAP twin: This technique is reserved for those cases with monoamniotic twins or where dividing amniorrhexis was performed.

Typically, you will remain in the hospital for 1 to 2 days after surgery. You will then be sent home to the care of your primary obstetrician and perinatologist. Weekly ultrasound is recommended for the four weeks after surgery. Then, depending on the clinical circumstances, follow up ultrasounds may be performed every 3 to 4 weeks for the duration of the pregnancy.

Medical Content:
Twin Reverse Arterial Perfusion (TRAP) Sequence: TRAP sequence affects approximately 1% of monochorionic twins, or approximately one in 35,000 pregnancies.1  The presence of artery-to-artery and vein-to-vein placental anastomoses between the twins allows for one fetus (pump twin) to perfuse the other fetus, typically referred to as an “acardiac fetus” (perfused twin).  The terminology of “acardiac fetus” is a misnomer, as the perfused twin may indeed have a rudimentary heart.  The perfused twin is supplied with blood in a reversed fashion, such that the umbilical artery carries blood to the perfused twin and the umbilical vein carries blood away.  Because of the direct artery-to-artery anastomosis, the perfused twin’s umbilical artery is composed of deoxygenated blood that exited the pump twin.  The perfused twin’s intake of deoxygenated blood results in severe maldevelopment of cephalic, thoracic, and upper extremity structures, and results in a condition that is not compatible with life outside of the womb.  The risk of pump twin demise is as high as 50 to 75% due to the hemodynamic burden that is exerted on that twin.2  Risk factors for poor perinatal outcome include pump twin polyhydramnios, critically abnormal Dopplers, hydrops, or a large perfused twin (greater than 50% of the pump twin).3**  If at least one of these factors is present between 16 and 26 weeks gestation, the patient should be offered the option of umbilical cord occlusion of the perfused twin.

The first successful umbilical cord occlusion (UCO) for TRAP sequence was performed by Quintero et al.4  The procedure was successfully performed at 19 weeks’ gestation via a two-trocar technique, and the patient subsequently delivered a healthy child at 36 weeks’.  Recently, we reported on 74 cases of TRAP sequence that were managed between 1993 and 2004.3  Entry criteria for UCO included the presence of at least one of the following: (1) abdominal circumference of the acardiac twin equal to or greater than the pump twin, (2) polyhydramnios (maximum vertical pocket > 8 cm), (3) abnormal Doppler studies in the pump twin, (4) hydrops of the pump twin, or (5) monoamniotic twins.  Surgical techniques evolved throughout the course of this eleven-year study, such that in the latter portion of the study the surgeries were performed using a single trocar technique without purposeful disruption of the dividing membranes.  Sixty-five patients met entry criteria, of which 51 underwent UCO attempt.  The overall perinatal survival for surgical candidates that did not undergo UCO was 43%.  Perinatal outcomes in surgical patients were significantly better than expectantly managed surgical candidates if the dividing membranes were not purposely disrupted (79%, p = .02).  The highest perinatal outcomes were obtained if operative fetoscopic UCO was performed within the sac of the perfused twin (83%).  This was feasible in approximately one-quarter of patients.

Fetoscopic umbilical cord occlusion can be performed using a variety of surgical techniques, each of which is particularly suited to a given clinical presentation.  The most important preoperative consideration is surgical access. We prefer to enter the sac of the perfused twin, as it offers all of the possible occlusion alternatives.  In addition, if rupture of membranes of the sac of the perfused fetus occurs, it may not necessarily affect the pump twin.  Disruption of the dividing membrane is avoided if possible.  Our choice of surgical technique depends on the specific characteristics of the cord and of the vascular anastomoses. If the perfused twin’s cord is accessible, we prefer to perform suture ligation, as this results in an immediate cessation of blood flow in both the artery and the vein.  Umbilical cord laser photocoagulation or laser of the vascular communications are possible options if the cord is not amenable to ligation.  Similar results should be achieved with bipolar electrocautery, although in theory this technique can be limited by the size of the umbilical cord and may result in bleeding from the cord.5  Although initial results using intrafetal radiofrequency ablation appear favorable, there is concern regarding this technique, as the extent of the thermal damage is not entirely under the control of the operator, may not avoid intraoperative exsanguination of the pump, and may result in intrafetal hemorrhage and death.6*, 7*

Enter an address or zip code and click the find locations button.
view on map