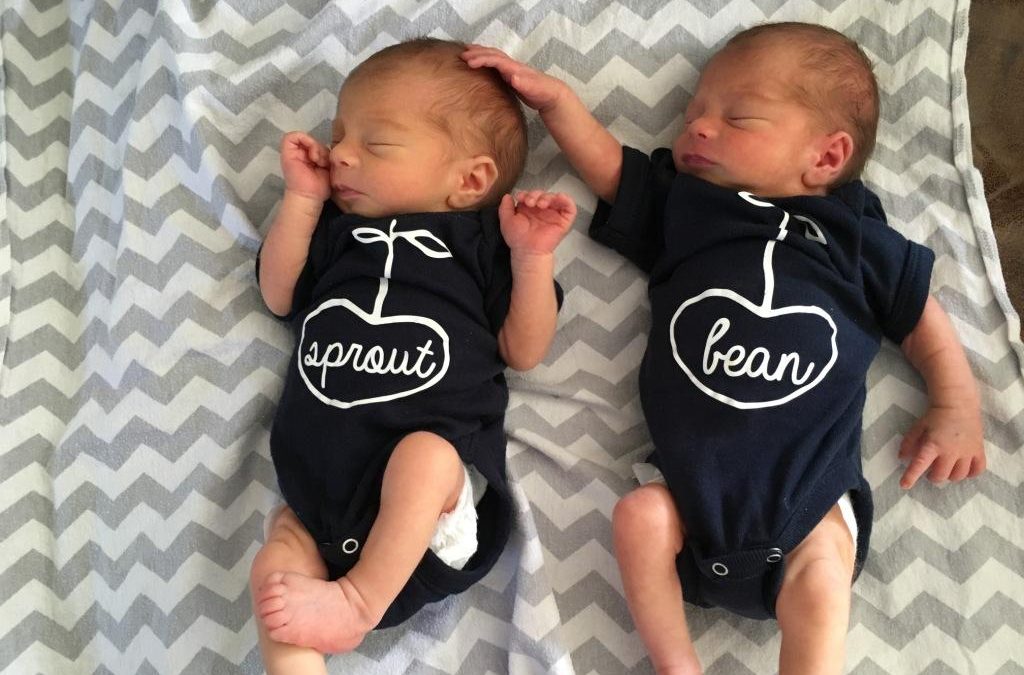 It’s not surprising that Mary Elliott is looking forward to spending a special Mother’s Day with her nine-month-old twin sons, Owen and Stevie. A little over a year ago, the first-time mom was struggling with the fact that her unborn babies might not survive.

Mary and her husband Scott were living in Hong Kong when they learned they were pregnant with twins, who they affectionately referred to as Bean and Sprout.  Although the couple decided they would return to the United States prior to the birth of their boys, they planned to remain in the Far East for a while, paying out-of-pocket for prenatal care at a Western medical clinic favored by expatriates.

During Mary’s 16-week appointment, she was told her babies were monoamniotic (MoMo) twins sharing the same amniotic sac and that there was no placenta membrane. She was told nothing could be done at that point and that a membrane scan would be done at 20 weeks.

Convinced that something was wrong with the diagnosis, Mary searched her previous ultrasound scans until she found one showing a membrane. She then spent several days trying to locate a doctor who could provide a second opinion.

Mary’s new doctor delivered a different diagnosis: her babies had twin-to-twin transfusion syndrome (TTTS), a condition that affects twins sharing a placenta.  In TTTS, the shared placenta contains abnormal blood vessels, which affects fluid balance between the two twins, and can cause the death of one or both of the babies. She was immediately sent to the public hospital, with its Eastern medicine and few English speakers.

After a few hours of ultrasound scans, a young English-speaking doctor told Mary she had an anterior placenta, and that because of the way the babies were positioned she did not think laser surgery was an option. However, she promised to consult with the department head. Since it was already late on Friday, Mary was asked to return on Monday.

The Elliotts spent the weekend, which Mary describes as the longest of her life, doing online research.    In addition to some information about the condition, they also connected with TTTS Facebook groups.

“The responses were very supportive,” she recalls, “but all strongly stated that we needed to get to the United States and have surgery as soon as possible.”

When Mary and Scott returned to the public hospital on Monday, they spoke with another doctor, who was a bit more optimistic about laser surgery. She scheduled the expectant mother to undergo the procedure the following day.

After checking into the hospital on Tuesday and going through all the preparations for surgery, the couple was told by the head of the department that they could not do laser surgery due to the position of Mary’s placenta  and because the babies were in the way and could be damaged.  Before being sent home, the Elliotts were given several options, the primary ones being to wait it out – which presented a risk to both babies – or to schedule a donor fetocide (intentional destruction of one fetus).

Among the people Mary encountered through the TTTS Facebook groups was Dalia EL-Prince, executive director of the Fetal Health Foundation, a Denver-based nonprofit that connects families diagnosed with a fetal disorder to top-rated medical specialists.  Dalia asked Mary to obtain her scans so doctors in the States could determine if surgery was possible. Thanks to the help of the doctor who originally diagnosed the twins with TTTS, additional ultrasounds were taken and provided to Mary on a CD.

When the new scans arrived in Denver, they were reviewed by Dr. Rony Marwan at the Colorado Institute for Maternal & Fetal Health, who determined Mary to be a candidate for surgery.  Meanwhile, Mary’s sister, Anna Bullard, spent the night calling maternal fetal centers around the country and sending out the scans.

Back in Hong Kong, Scott woke Mary Wednesday morning with the decisive news that they would be leaving for Los Angeles at midnight. Thanks to Mary’s sister, who had flown from Lexington, Ky., to meet them in California, the couple already was scheduled to meet with Dr. Ramen Chmait at the Institute for Maternal & Fetal Health, USC-Children’s Hospital Los Angeles.  USC-Children’s was the closest specialist center after the long journey from Hong Kong. They arrived for their appointment at 4 a.m. Thursday, April 21.

At 9 a.m. that day, he performed laser surgery to seal the vascular connections between the twins.  After waiting 24 hours, a scan showed success and that everything looked good.

In one of her frequent updates to their family and friends, Mary wrote, “The power of prayer teamed with modern medicine really came through for us and we are feeling blessed. . . It’s been the hardest week of our lives and we couldn’t have pulled through with as much hope as we did without you.”   She is also thankful to her husband, saying, “Scott was a rock who took control when I was so overwhelmed that I didn’t know what to do.”

A few days after surgery, Mary flew to Lexington, where she had been raised.  Scott headed back to Hong Kong to pack up their possessions; then he joined his wife in Kentucky.

On July 5, when Mary’s water broke, she immediately went to the University of Kentucky Hospital in Lexington.  She spent the next four weeks there on bed rest under the care of Dr. Wendy Hansen.  On August 5, she gave birth to four pound-seven ounce Owen (the TTTS donor twin, aka Sprout) and four pound-nine ounce Stevie (the recipient twin, aka Bean).

Following the babies’ 10-day stay in the Neonatal Intensive Care Unit, their parents brought them to their new home on August 15. With the twins safely settled in their Pack & Play amid all the moving boxes, Mary and Scott collapsed into tears of joy. Their nightmare journey that stretched from April in Hong Kong to August in Lexington had finally ended.

Today, Owen and Stevie are healthy and happy.  And their parents feel incredibly blessed.

“I can’t imagine life without either one of them,” their mother admits.

Looking back at her family’s experience, Mary wishes the doctor in Hong Kong had said,

“I can’t do this, but there may be someone else who can.”

And she hopes that others find the resources and centers that can help them.

According to EL-Prince, that is the mission of the Fetal Health Foundation. EL-Prince states, ”Through our Web site, the Fetal Health Foundation has been able to assist expectant parents from around the world in getting life-saving treatments for their babies. It is heartening to know that there are children living in India, China, Australia and many other countries, as well as throughout the United States, who have benefitted from the information and support our organization provides nationally and internationally.”

Mary doesn’t know what her husband has planned for Mother’s Day 2017 and says it doesn’t matter. What’s important is that she will be celebrating with “my incredible boys.”