Sawyer Strong: Proof They are Stronger Than Their Stories 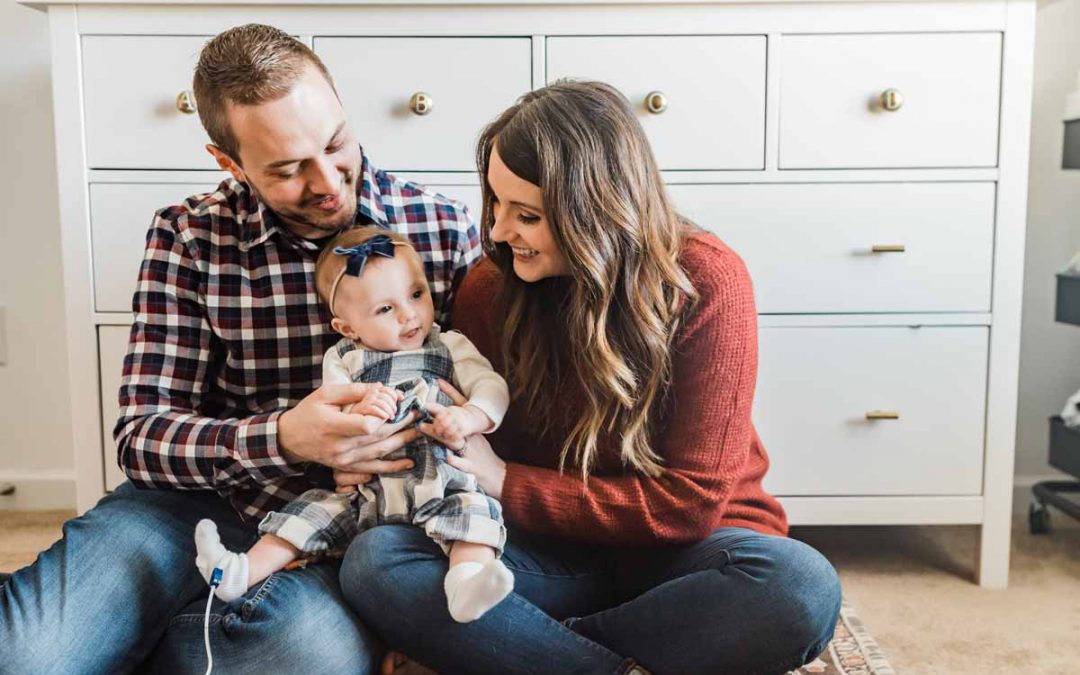 At 18 weeks pregnant, we had prayed to become parents for over a year and half before finding out that In Vitro Fertilization was our only hope at parenthood. With our first round of fertility treatment a success, our only prayer was for this child to be healthy.

I’ll never forget sitting in that room at our maternal fetal doctor’s office waiting for the results from our anatomy scan. I never fully understood what maternal instincts felt like until that moment. Something wasn’t right and I felt it in my gut. This was the day we were told that our baby’s heart wasn’t forming correctly and that she would need open heart surgery in order to survive once she was born.

My heart was broken and my emotions lingered somewhere between anger and fear. Over the next few weeks we learned more about our sweet Sawyer and her heart. Her official diagnosis is Complex Congenital Heart Defects which include Dextro-Transposition of the Great Arteries, Ventricular Septal Defect, Patent Ductus Arteriosus and Pulmonary
Stenosis. She had not only one, but four different heart defects.

Our team of doctors talked us through each step, from Sawyer’s birth to her first heart surgery. All there was left to do was wait for her arrival. I was induced at 39 weeks and knew the plan like the back of my hand. Once Sawyer was born, they would check her heart function and whisk her away to the NICU where she would be put on a medication to keep her heart functioning until she was one week old, and then it would be time for her first open heart surgery. Upon arrival in the NICU, we learned that one of Sawyer’s defects, the PDA, simply no longer existed. Our prayers were being answered. In that same moment, her doctors informed us that because of this, there was a lack of blood mixing in her heart chambers and she would need to undergo a procedure immediately to create more blood flow.

At just four hours old, my tiny girl had her first procedure. I was a mess of emotions. We were told repeatedly that she was doing much better than anyone expected. Originally, we were told that she would struggle to eat and most likely require a feeding tube, however, Sawyer had other plans, and at two days old while in the Cardiovascular Intensive Care unit she took a whole ounce of milk from a bottle.

Everyone, including myself, was amazed. After a few days in the CVICU we moved up to the Progressive Care Unit, where we continued to work on eating and gaining weight. After eight days, our team gathered to discuss Sawyer’s case. It’s rare for a child with a TGA heart defect to leave the hospital without their first reparative surgery, however,
Sawyer was fighting, and doing pretty good at it I might add.

After much debate, the team decided to send Sawyer home and we would plan for her first open heart surgery to be that fall. We were on strict orders to monitor her heart rate, oxygen levels and weight gain. If there were any dips, we were to be admitted immediately. Life at home was great, but also scary. We were no longer surrounded by a highly trained team of nurses and our team of doctors were no longer just a page away.

We were at home for a little over two weeks when Sawyer’s oxygen levels dropped drastically. We were told to pack a bag and head to the Children’s Hospital. It’s an easy drive, but that day it was a hard drive to make. We were admitted onto the Progressive Care Unit where Sawyer was attached to monitoring leads and oxygen support. She was stable, so we waited for a surgery time.

Sawyer’s open heart surgery was 6.5 hours long. We finally got to see her after a couple of hours, once she was settled in the CVICU. It is hard to see your baby with so many IV lines, chest tubes, drainage bulbs, and a large incision along her small body, but at the same time, I couldn’t leave
her side. We spent the next seven weeks in the hospital while she recovered. It was not an easy recovery and we met challenge after challenge. On the first attempt to remove Sawyer’s breathing tube, her left lung collapsed, resulting from her left diaphragm being paralyzed. This is a typical complication, but nonetheless, extremely hard for a parent to witness.

Later down the road, the breathing tube was successfully removed, but Sawyer had a hard time breathing without assistance. Feeding became our next biggest hurdle. She developed a feeding aversion and required an NG feeding tube, which is placed in through the nasal cavity. When her stats bottomed out at the time the feeding tube was being placed, it was quickly determined that Sawyer was no longer a candidate to go home.

At three months old, Sawyer had to undergo another procedure to place a more permanent feeding tube into her stomach in order for home to even be a possibility in the near future. Things were beginning to look up, and then Sawyer began not acting like herself. Her team ran test after test and it was then confirmed that Sawyer was in heart failure. During her surgery, a patch was placed over the hole that was created during her first procedure and over time, that patch had torn. The team decided to place her on medications to manage her
heart failure, and we would patiently wait until the next surgery to repair this hole, as long as Sawyer’s heart was in compliance. The meds began to work and Sawyer looked much better. We were discharged from the hospital after nine long weeks with a 3.5 month old baby, a snazzy feeding tube and pump, and a handful and a half of new meds to go along with it.

Home felt different now and finding our normal was no easy task, but we found it in time.

Sawyer is currently a wild and smiley eight month old. She has proven to us time and time again what strong looks like. We have many more surgeries in her future, but if you didn’t know any better, you would never know that she proudly wears a heart warrior scar.