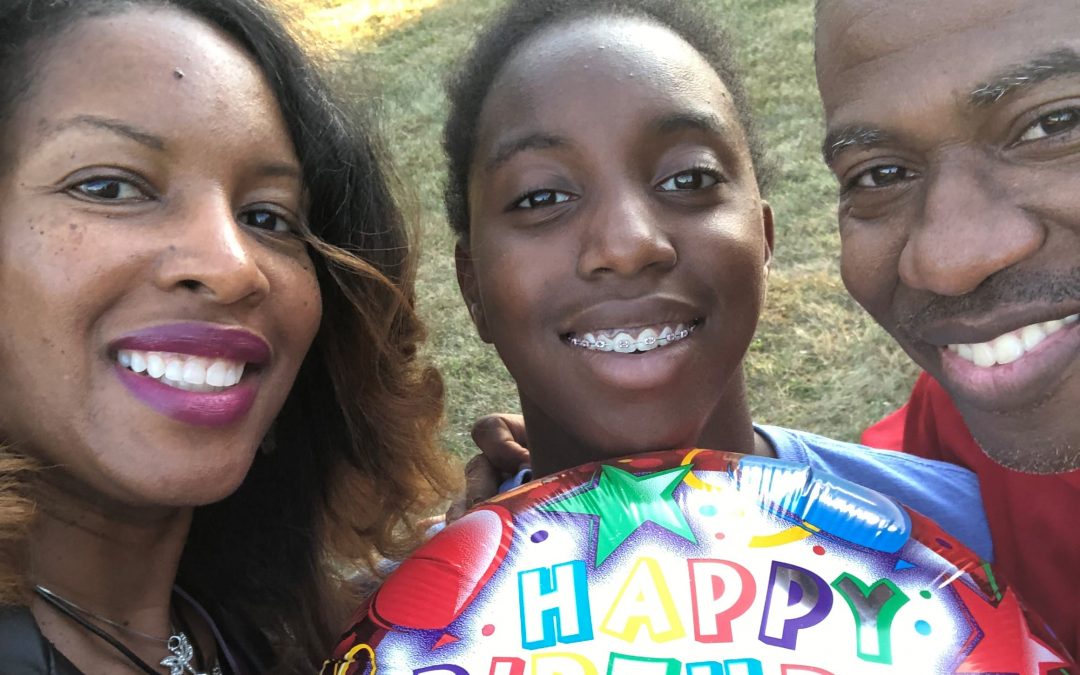 We are grateful to Tangie Jenkins for sharing her very personal stories of loss and of hope. We appreciate her giving us insight into her experiences and helping all of us to improve maternal care for Black women.

My daughter, my first born, is my miracle baby. Today she is a healthy, smart, funny, and thriving teenager. She is my miracle baby because she was born premature, at 27 weeks’ gestation. She was just two pounds and measured thirteen inches. We didn’t know if she would make it.

The morning after I unexpectedly gave birth at 27 weeks, my doctor checked in on me and my baby at the Neonatal Intensive Care Unit (NICU). He said he spent the night in the hospital because we were both in critical condition and he didn’t know if either one of us were going to survive.

That’s when I realized how serious my situation was. But no one provided me with any explanation as to why we were in critical condition.

I didn’t know why my baby was born prematurely and I didn’t know what our health issues were. I was later diagnosed with placenta
abruption, but what caused that?

As a new mother, I didn’t know what to expect and I was not provided with a lot of information. I thought I would be able to take my baby home, until NICU doctors informed me that my
daughter would need to stay at the hospital for at least three months (closer to her original due date). Still, nobody was able to tell why it happened.

Six years later I became pregnant again after three unsuccessful rounds of IVF. My husband, daughter, and I were thrilled. I was, however, concerned about having another preemie. I
wanted to make sure that we did everything possible for me to deliver a full-term baby. I did some research and found a doctor who specialized in high-risk pregnancies. The doctor kept a
close eye on me in the beginning of my pregnancy, but after monitoring me until my 20th week
of pregnancy, the physician told me I was “good to go,” and would not need further evaluation or
high-risk appointments.

At 27 weeks, I was placed on bed rest at home because during a regular checkup the doctor saw that my blood pressure was very high. I followed the recommendations and remained on
bed rest. A few days later, I stopped feeling my baby kick and move, so I went to the hospital where a doctor performed a sonogram and informed me there was no heartbeat.
I was devastated. I was mentally prepared to have another preemie but having a stillborn was too difficult to comprehend.

I did everything right, how did this happen?

Should I have been on bed rest in the hospital instead of at home to monitor the heartbeat?

Looking back, I realize there were signs that were concerning to me early in my pregnancy, but my physicians were dismissive of them. I had bad swelling in my feet and legs, so much so that
I could only wear flip flops. Also, I was experiencing pains in my chest, but the doctors were dismissive of that as well. They said these things happen in the summertime to pregnant women. They blamed the heat for my issues.

All my tests came back normal, but I felt like something was off. I told the doctors that something didn’t feel right, but they did not listen. It is demoralizing when someone is saying
you don’t know what you’re feeling in your own body and they are dismissive of you, especially after delivering prematurely before. I wish I had been more relentless in letting them know that
something felt wrong.

I never found out what happened with my stillborn son. The doctors ran tests on both of us to check for things like blood clots, but the tests came back negative.

I have come to learn that medical professionals do not always take women seriously, and it’s even worse for women of color. When we come in with a pain or something that feels abnormal,
they’ll often push us aside and say everything’s fine. The maternal health crisis is rising in the U.S., where women are more likely to suffer a pregnancy-related death today than in the 1990s. [1]

The danger is even greater for Black women, who are 3 times more likely than white women to die as a result of pregnancy, [2] and more than twice as likely as white women to lose
an infant to death.[3]

I have been sharing my story to raise awareness of the realities of the Black maternal health crisis in the U.S. I hope that by hearing my experiences, other women will demand and receive
the pre- and post-natal care they need.

I work at Johnson & Johnson and feel fortunate to work for a company that supports me, listens to me, and wants to help other women like me. When I hear about the research J&J is doing to
develop life-saving treatment for women and children and what the Office of the Chief Medical Officer (OCMO)’s Health of Women and our Government Affairs teams are doing to specifically
support women and Black maternal health, I am blown away. Learn more about what J&J is doing to improve healthcare for Black Women here. J&J is addressing this because it matters, and so I feel like I matter, like I have a voice.

I was honored to be selected for J&J’s Global Pro Bono Program in partnership with the March of Dimes in Puerto Rico to understand why the U.S. territory was having success reducing their
premature birth rate. The goal was to bring lessons learned back to the U.S. to help improve things here.

Tangie Jenkins lives in New Jersey with her husband and daughter. She enjoys photography,
walks for charity and being a marching band parent. She has worked at Johnson & Johnson for
more than 20 years.