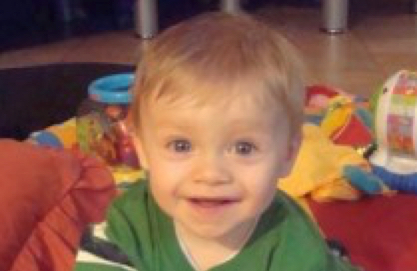 I can remember the rush of gratitude and joy that I felt the moment the sonographer confirmed that our Leilani was going to have a brother.  I couldn’t think of another time that I felt so incredibly lucky – I was going to have the perfect, complete family that I had spent my entire life wanting.  The last boy to be born in our family had been over 30 years before, and secretly we had all been praying for a little boy.  I couldn’t believe my luck, and my husband and I shed a tear before immediately starting to talk about how we could surprise our families with the news that all of our prayers had been answered.
The 18 week scan was finished only a few minutes later.  The sonographer allowed us to excitedly chat together before quietly letting us know that although there was no need for panic, she had seen something abnormal on the scan.  Within 48 hours, we were sitting and waiting to meet the head of the Maternal Fetal Medicine department in our city.
It was discovered that our little boy had bilateral pleural effusions, fluid surrounding his heart and lungs.  We had a detailed ultrasound, amniocentesis and various other tests.  We had to wait for 2 weeks to see if the cause was an infection, to see if it would be recommended that we terminate the pregnancy.  My husband’s 30th birthday was during these 2 weeks, and we had a huge party, but never told anyone what we were going through.  We both earned Oscars that night.

We already had a name picked out for a boy, but should we use it?  It was the only name we could agree on.  Should we prepare the nursery?  Buy blue blankets?  Share pregnancy stories with all of the “normal” mums?  How do you prepare for a baby that may not be?

I spent a lot of time thinking about that question.  Finally, I realized that he already “was”.
He was my son, and he was beautiful, and precious, and here, and he deserved our favorite name and he deserved a nursery that his parents were excited about and he deserved blue blankets, just the same as our daughter deserved all of the little things we had done for her.
A very long two weeks later, we were back.  Walking past the hospital café, I saw a beautiful big lion toy in the window.  I told my husband that our little boy was as brave as a lion, and that to prove it, when he was born happy and healthy, I would buy that lion for him.  We walked in to find out that there was no infection, but the fluid was getting worse, much worse.  It was now in our little man’s stomach, meaning he had developed Hydrops Fetalis.  This reduced his survival rate considerably.  In our opinion, given his circumstances, his best chance was for us to physically try to help him.  It broke my heart that my baby was only half way through his gestation, and already he had to be braver than many people ever have to.  It just wasn’t fair.
We booked in to have a thoracentesis performed, a drain of the fluid from one side of his chest, to see if removing it would fix the problem.  Within 48 hours though, all of the fluid was back, and even worse than before.  We had to move forward with another option – shunt surgery.  This was when I started to realize that I would have to get used to sitting in the hospital ultrasound department waiting room, praying desperately for my baby to still be alive when they placed the scanner on my stomach.  I still watched that toy lion in the window every single week.
The shunt surgery was performed and placed correctly in his little chest, allowing the fluid to drain from his chest out into me.  Within 24 hours though, it had dislodged.  Stubbornly, I refused to spend more than a few moments being upset about it.  My son needed me to be strong for him and to give him the voice that he didn’t yet have, and I wouldn’t let him down.  We booked in for another surgery. On the day of the surgery, the fluid looked to have stabilized a little, so the medical team performed another thoracentesis instead.  Just 2 days later, it was confirmed that the fluid was back again.  A further shunt surgery was performed, but the shunt was placed too far in to be effective, so another had to be placed.  This one was placed perfectly and looked to be working well – for a few days.  Eventually, it too dislodged.
I spent a lot of time talking and singing to my little guy, willing him to get better, letting him know that we loved him and that I wouldn’t have traded him for anything in the universe.  He was perfect in my eyes, just as he was.  I refused to believe that he wouldn’t survive, and spent very little time entertaining that thought.  I kept watching the lion.
I was given steroid injections and told that all we could do was wait and watch to see how he went.  There was just no more that anyone could do, and we had already pushed our luck to its limit, having pierced his little home so many times for the amniocentesis and each of the 5 procedures.  After all of this, he was still only 26 weeks gestation.  We had weekly ultrasounds, at first seeing a little more fluid every week, before watching the fluid begin to stabilize.
At just over 33 weeks gestation, we had come in for our normal ultrasound, nervously joked with our beautiful midwives like we normally did, then waited to see what was happening.  The scanner was placed on my stomach, and everyone in the room froze.  My husband and I had seen enough ultrasounds to realize that something was very different.  ALL of the fluid was GONE!  The condition that my son had, Congenital Chylothorax, had corrected itself, and our Kai was given a further 4 weeks of lung development before deciding to make an unexpected appearance on the day of our final ultrasound.
He was born healthy, happy and LOUD!!  He didn’t spend so much as a night in the NICU.  The day after he was born, the first moment I was allowed out of my room after surgery, I stood up, got changed, and hobbled all the way down to the ground floor of that hospital on my own, all the way down the hall to the café and gift shop.  Finally allowing myself to feel some of the emotion that I had tightly held in for the last few months, without any embarrassment, between huge heaving sobs, I bought that big lion for my brave little boy.
Kai has some little battle scars from his procedures in utero, and from his surgery a few months after birth to remove the wayward shunt, but that’s what they are….  battle scars.  A reminder to us, and eventually a reminder to our Kai, to never forget where he came from, what he has overcome, and how incredibly extraordinary he is.