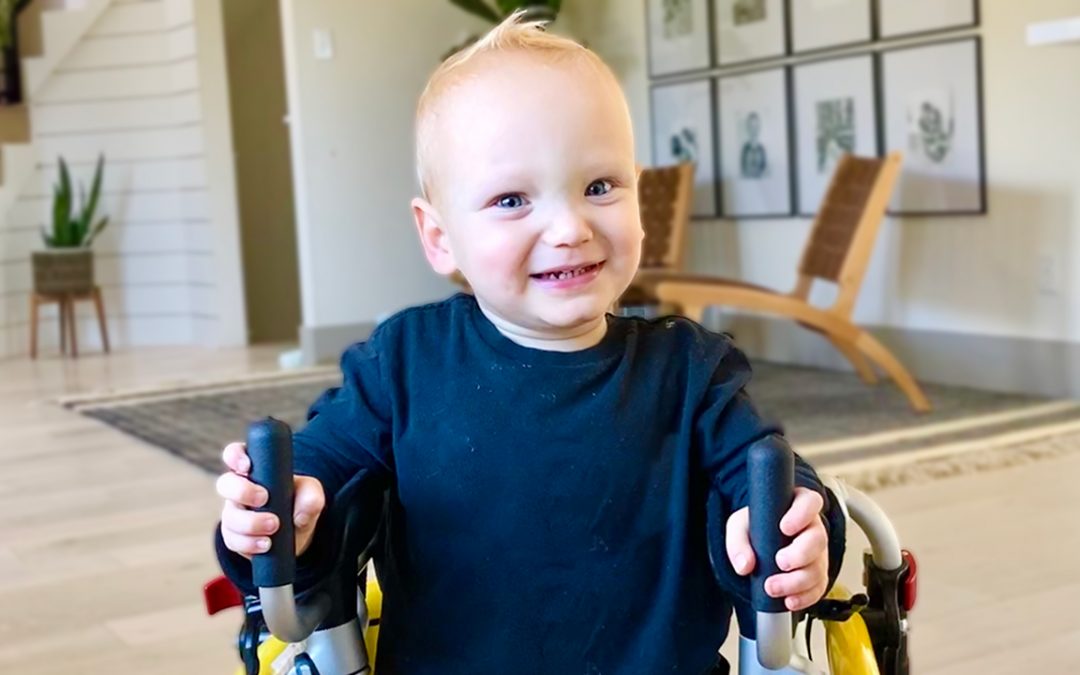 Fetal surgery for myelomeningocele (MMC), the most severe type of spina bifida, improves outcomes for many families. The Colorado Fetal Care Center, one of the foundation’s “Friend” Stewardship Circle supporters, has given The Fetal Health Foundation permission to share Katie and Kyle’s story. We’re thrilled to see the video of this happy family.

Katie and Kyle have two other children. So by Katie’s third pregnancy, they were seasoned parents and felt like they knew what they could expect.

In fact, at Katie’s 19-week ultrasound in their hometown of Huntington Beach, California, both Kyle and their two kids attended, hoping to get a glimpse of baby Liam during the last five minutes of the appointment. But those last five minutes never came. Instead, Katie was moved to another room.

“The doctor came in and handed me a box of tissues,” Katie recalls. “She was saying something about an abnormal pregnancy, shunts, abnormalities of the left leg, club foot. I was in complete shock at that point, and I couldn’t really make out what she was saying because it felt like time was suspended.”

In a span of two hours, their lives had been turned upside down.

Searching for hope after a myelomeningocele diagnosis

Katie and Kyle were referred to a specialist in Los Angeles who confirmed that Liam had myelomeningocele, or MMC, the severest form of spina bifida. MMC occurs when the spinal cord and canal don’t properly close, causing a fluid-filled sack to develop on the baby’s lower back.

It’s incredibly rare, occurring in about 3.4 in 10,000 births, and it can cause complications including difficulty or inability to walk, poor or no control of the bladder and bowel, and abnormal development of the feet and legs.

“During that appointment, we kept hearing the phrase ‘If you continue this pregnancy …’ and that was devastating,” Katie says. “They told us Liam’s quality of life would be poor at best. But they did mention fetal surgery for spina bifida. They said it was the newest cutting-edge treatment for spina bifida, but that we’d have to do it before 26 weeks, and it was only offered in a handful of places across the country.

“So we went home and the only way I can describe it is that we mourned, and we researched feverishly — searching for some answers and some form of hope. We couldn’t control everything else that was going on, but that was something we could do. And it led us to the Colorado Fetal Care Center at Children’s Hospital Colorado. We read that they could repair the spine in utero, which is one of the most advanced treatments there is, and that they have one of the highest success rates with doing MMC repair. So, we gave them a call.”

There’s a reason spina bifida repair in utero is only offered at a handful of centers. It’s an extremely complicated and technical surgery that requires an entire multidisciplinary team of specialists including a fetal and pediatric surgeon, a fetal and pediatric neurosurgeon, maternal fetal medicine specialists, a fetal cardiologist, a maternal and fetal anesthesiologist, and specialized registered nurses.

At this point in a pregnancy, the baby is tiny, weighing less than a pound. Additionally, the entire surgery occurs while the baby is still connected to the umbilical cord — meaning they only partially remove the baby from the womb to complete the repair. After the surgery is finished, the team closes the uterus and works to help the mother continue the pregnancy for as long as possible. The risk for pre-term labor is high, especially after 26 weeks, which is why the surgery needs to be done before then.

A lot goes into making sure the mother and baby are even eligible for in utero surgery. In addition to an MRI, fetal echocardiogram, genetic testing and multiple ultrasounds, the team had to comb through Katie’s health history and take many other factors into account to ensure they were a fit. If a baby has other co-morbidities (additional diseases or medical conditions), it eliminates them as a candidate for surgery. Luckily, Liam didn’t.

“From the moment we walked in, everyone made us feel supported and said, ‘We’re here and we’re going to help,’” Katie recalls. “The meeting with my care team still stands out in my mind. Everyone was there. Everyone. I was taken aback. Even though it was a representation of how critical our situation was, it was amazing to know we were backed by so many specialists. They each introduced themselves, shared a piece of their individual expertise and presented a picture of the lifetime of medical care our son would need. Then they said, ‘If you choose this, we’ll be here for you — from fetal surgery and beyond, through the NICU, but most importantly, for Liam’s continued pediatric care as he grows.’”

Katie and Kyle were all in. And they knew it would be a long haul, but they didn’t want anyone else to care for their baby but the team at Children’s Colorado. So they went back to California for a couple of weeks to prepare, and then headed to Colorado to stay with family until a long-term room opened up for them at Ronald McDonald House Charities in Aurora near the hospital.

“It was the same team that sat with us during the evaluation,” Katie says. “From what they tell me, they made an incision hip to hip and cut my uterus vertically to expose Liam’s back and close his spine. The hope was that it would protect his spine from further damage, prolong the gestational period, and give him the best possible quality of life after he was born, including preventing other injuries or complications that can occur.”

While recovering on bedrest at the Ronald McDonald House shortly after surgery, her water broke. But at just 23 weeks, it was still too early for delivery. So, she was admitted to the hospital two days later, and it became her home for the next 10 weeks while the care team monitored her and did everything they could to prolong her pregnancy.

Long-term stay at a children’s hospital

“We had about 10 scares during that time,” Katie says. “They did emergency IVs, and everyone would flood the room, and they would end up being false alarms. It was tough. But Kyle was right by my side the whole time. And my kids were there, too. We basically built a home. There were pictures on the walls and crumbs on the floor from our other kids, and the team would have to clean, of course, which we tried to help with because we felt so bad about it, but they never seemed to mind.

“We felt so comfortable and more supported than we could have ever imagined. It was so important to us to be at a children’s hospital where my kids could be kids. The playrooms, sibling rooms — all of it played a huge role in my family’s mental health.”

Each day she was pregnant was a huge victory, Katie says. But when the time came for Liam’s delivery at 33 weeks, her care team was ready. Her favorite nurses were with her — nurses that had become her friends. The C-section went well, but Liam had trouble breathing. “I had a feeling something was wrong,” Kyle says, “because once they took him out, he went directly to the neonatologists so they could start working on him. It was so tense, and it took about a minute and a half to get him to breathe. But they did, and then we got to see him for a short bit before he went straight to the NICU.”

“I remember seeing him and being so overwhelmed,” Katie adds. “He was beautiful, and we had waited for this moment for a long time. We weren’t sure what his abnormalities were going to look like. He had club feet and at first glance his legs were up by his ear. They were going to need a world of correction, and I was so nervous, but I just remember thinking that he’s OK and that’s what matters.”

About 80% of children with spina bifida need a ventriculoperitoneal shunt, or VP shunt, a device that takes the excess fluid out of the brain and moves it to the abdomen. The problem, though, is that those shunts can sometimes malfunction. Fetal surgery reduces the risk of needing a shunt by half. Additionally, the Colorado Fetal Care Center has a 12.5% shunt rate, lower than average (the lower the shunt rate the better).
With careful monitoring, Liam didn’t need a shunt. And with help from his NICU care team, Liam’s condition steadily improved, and he was discharged after a month-long stay.

Upon their return to California, though, things weren’t the same. Liam’s care felt different, harder — mainly because Liam had to see many specialists for many different aspects of his care. It felt so taxing that Kyle actually found a job in Colorado Springs and they bought a house sight unseen just to switch their care back to Children’s Colorado.

“There’s a clinic here in Colorado Springs that we visit at the Briargate location, and we travel to Denver every six months for appointments,” Katie says. “One of the things we really like about our visits to the multidisciplinary care clinic for spina bifida is that all of our appointments are on one day and in the same room. We see neurology, urology, orthopedics, rehabilitation, occupational therapy, physical therapy — all of them. We’re in one room and they rotate in.

“Liam is doing so well. And we’re so happy to share our story with other families. We’ve shifted our entire lives because of this hospital, and we wouldn’t have it any other way. Children’s Colorado does a fantastic job of encompassing every aspect of the patient. If we’re in for a lifetime of care for Liam, this the kind of care we want to receive.” 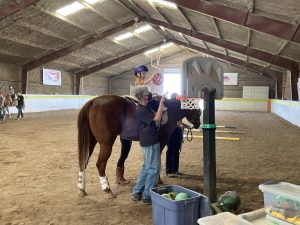 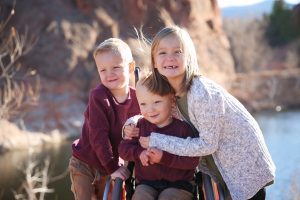