Eli’s Story: Finding a Miracle at the End of a Diagnosis 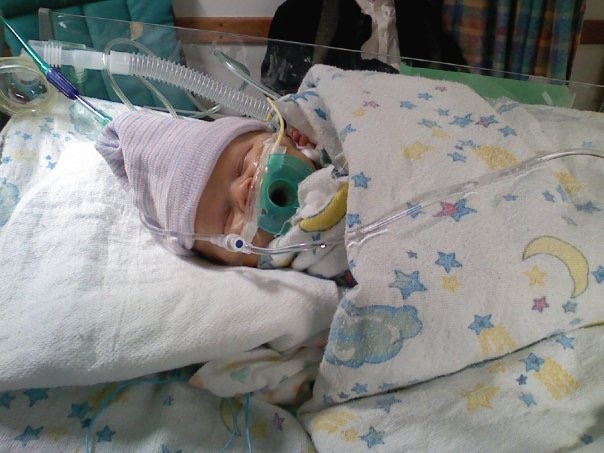 As we begin Fetal Syndrome Awareness month, we share the story of Elijah, diagnosed with LUTO before he was born.

“There’s a major problem with your pregnancy.”

Words no expecting parents anticipate hearing. Going in for our routine twenty-week ultrasound, I was so excited to find out what we were having. After about fifteen minutes of maneuvering the wand all over my modestly pregnant belly, the ultrasound technician informed us she would be getting the doctor. The doctor came in and that was when we heard the words that would forever change our lives. Everything else seemed foggy after that. I remember hearing words like, “the bladder isn’t releasing urine” and “the amniotic fluid level is dangerously low.” To be honest, I understood very little, until he sat us down in a consultation room and gave us our options. That was when the grim reality of our situation hit me. Without intervention, our baby was likely to not survive the remainder of the pregnancy.

Our maternal fetal specialist went on to explain our baby was suffering from a condition known as a Lower Urinary Tract Obstruction, also known as LUTO. He gave us information and warned us not to Google any of what he was about to tell us, because there would be a lot of misinformation on the internet and he didn’t want us to make a decision based on what we might find. He went on to explain that because of the obstruction in the urethra, urine was unable to be released from the bladder. The bladder was large, and the amniotic fluid levels were dangerously low because a large portion of the amniotic fluid is made up of the baby’s urine. It’s a constant cycle of ingesting the amniotic fluid, which aids in the development of the baby’s lungs and other vital organs, and then excreting the urine. When there is a hiccup in the process, the entire cycle stops.

We could terminate the pregnancy or “just let nature take its course”, which would likely result in our baby passing in utero or shortly after birth.

Our third option was a long shot. If our baby was a candidate, we could have fetal surgery performed.

The rest of that day was a nightmare. Friends and family were calling anxious to hear the outcome of our ultrasound and find out if we were having a boy or a girl. It was difficult to get through the phone calls, trying to explain what we were still struggling to understand ourselves. We had a million questions and went against our doctor’s advice, but we found the Fetal Health Foundation, known at the time as Fetal Hope. It was exactly what we needed.

We read about a little boy named Elijah Wick, who was five years old at the time. We were given the hope we were looking to find, that there was a possibility our baby could have a good life. This little boy, living only about 500 miles away in Jacksonville, Florida, had survived a fetal surgery for the exact same condition, was living a “normal” childhood. This was the one sliver of hope we needed to give us the push to do everything we could to save our baby’s life.

I had several tests performed that revealed we were having a boy, and that our son was a candidate for fetal surgery. We traveled to the Children’s Hospital of Philadelphia once we got the news. The doctors wanted to make sure we knew that fetal surgery would not be a “cure”; that it would simply aid in reaching a viable delivery date. More surgeries would be needed throughout his life. The fetal surgery was a success, and I went back home where I would continue routine monitoring.

One month after the surgery, the shunt placed dislodged, so we opted to go back to Philadelphia for a second procedure. The doctors predicted premature labor due to all the invasion of the womb, so they suggested I stay there until delivery.

At almost 34 weeks gestation, on November 21, 2009, I delivered a 5 lb. 9 oz little boy, who we named Elijah. At birth, they declared that he was in kidney failure and that his lungs were underdeveloped. While at CHOP, he was on various breathing machines and he also had his first surgery. He was relocated and later discharged from the NICU at All Children’s in St. Petersburg in January 2010.

Over the next two years, he would have more procedures, including the placement of a g-tube and multiple bladder modifications. In the spring of 2012, we moved to Indiana, where he’d continue his care at Riley Children’s Hospital. We began the workup necessary for him to receive a kidney transplant. Our routine consisted of going to the hospital three times a week for him to receive hemodialysis, which lasted 3-4 hours each session. In September 2013, Elijah received a kidney from his uncle (my brother). It was the beginning of a whole new life for Eli. 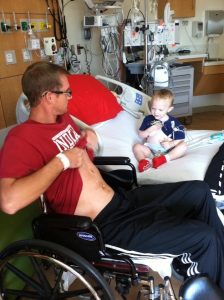 Eli’s uncle donated a kidney to him.

Since his transplant, life has gotten increasingly better with his “new to him” kidney. Prior to his transplant, he was completely reliant on a feeding tube for all his nutrition. With kidney disease often comes growth struggles, so the g-tube helped him get the extra nutrition he needed to continue growing. 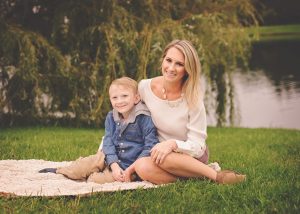 Now, five years post-transplant, he still has the g-tube, but only uses it to receive medications. He also no longer receives dialysis; in fact, he only has to go to the hospital once every three months now for check-ups with the transplant team. 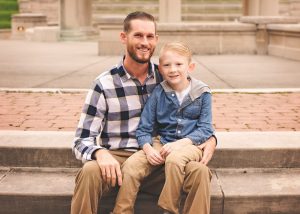 Eli is now in third grade, and while he still receives medications daily, he shows little signs of the tough journey he endured in his first few years. He has learned to take great pride in his battle scars. A day never passes that we don’t stop to reflect on the journey we’ve all been on together to get to this point. If the past nine years have taught me anything, it’s to hold on to my faith, that miracles can happen. I am a mom to one. 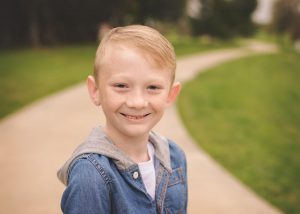 Matthew, a LUTO Fighter and Survivor

Know a family experiencing a fetal syndrome diagnosis?  As a parent-founded non-profit, we’re here for them. Reach out

We hope you’ll make a donation to help provide hope and resources to families like the Hydes. Donate Now